Barnaby Joyce’s latest antics do nothing to move Australia forward »

There’s great excitement about Australia potentially producing hydrogen as a clean fuel at large scale, for export to countries such as Germany, Japan and South Korea.

Hydrogen (H₂) is a useful energy carrier, and doesn’t release greenhouse gas when that energy is recovered. But carbon dioxide (CO₂) can be emitted when hydrogen is produced, depending on whether the process uses renewable energy or fossil fuels.

Dr Alan Finkel – the federal government’s special adviser on low-emissions technology and a former chief scientist – said this month: “The world’s going to need a lot of hydrogen, and so the more ways we can get that hydrogen the better”.

But our analysis, released today, shows producing hydrogen from fossil fuels carries significant risks. The process can emit substantial greenhouse gas emissions – and capturing these emissions at a high rate may make the process more expensive than hydrogen produced from renewable energy. These findings have big implications as Australia looks to become a hydrogen superpower.

Renewables or fossil fuels? The way hydrogen is produced makes a big difference to its emissions intensity. Shutterstock

‘Clean’ hydrogen from coal or gas?

Zero-emissions “green hydrogen” is produced via the electrolysis of water, when the process is powered by renewable energy.

Hydrogen can also be produced from fossil fuels – including coal and gas. This can leads to a lot of CO₂ emissions, even when some carbon is captured and stored.

In a recent Quarterly Essay, Finkel said CO₂ from hydrogen production will need to be captured and stored – in fact, he argued, importing countries would insist on it. This, Finkel says, means hydrogen from fossil fuels would be “clean hydrogen”.

But rates of carbon capture and storage (CCS) vary. And the greater the rate of emissions captured and securely stored underground, the more expensive the process. 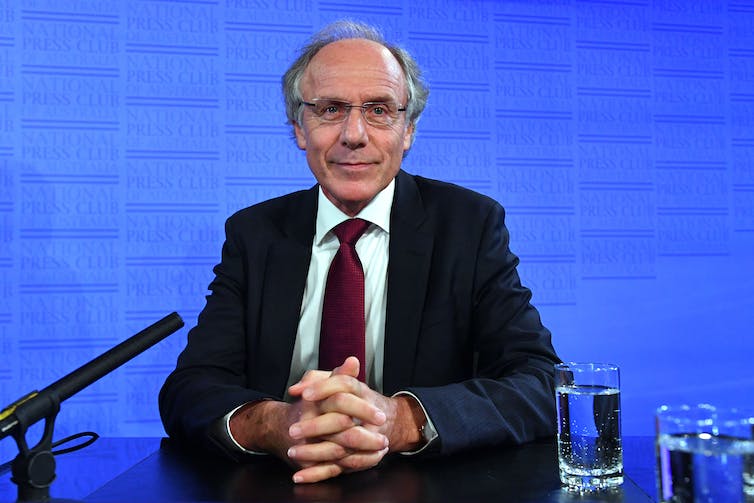 A focus on emissions intensity

Globally, only a few large-scale hydrogen plants currently operate, and the rates of carbon capture achieved in practice are rarely reported.

When assessing whether a fuel source is low-carbon, we calculate its “emissions intensity”. This refers to how many kilograms of CO₂ is associated with the energy produced.

Our analysis found the emissions intensity of fossil-fuel based hydrogen production systems are substantial, even with carbon capture.

For example, the production of hydrogen from coal, if 90% of emissions are captured, has an emissions intensity not much below that of using gas for the same energy content. The same goes for hydrogen from gas, with a 56% capture rate.

Our analysis also takes into account so-called “fugitive emissions” released during the extraction and processing of fossil fuels. They are typically ignored, but are significant.

Read more: For hydrogen to be truly 'clean' it must be made with renewables, not coal

Under global accounting rules, emissions from hydrogen production will count against the producing country’s inventory. But many hydrogen importers concerned about climate change will want to know what emissions were released in production.

This can be done through hydrogen certification schemes. For example, the European Union has developed the CertifHy Guarantee of Origin scheme which accounts for the origins of hydrogen used. It includes information on whether the hydrogen was produced using renewable or non-renewable energy sources (such as nuclear, or fossil fuels with CCS).

Under this scheme, only hydrogen produced from natural gas with a high carbon-capture rate (towards 90%) could be called “low-carbon” hydrogen.

These high capture rates are assumed in major reports and national strategies – including Australia’s – but have not been achieved at a large-scale commercial plant. Japan’s Tomakomai CCS demonstration project has achieved a 90% capture rate – but at a very high cost. 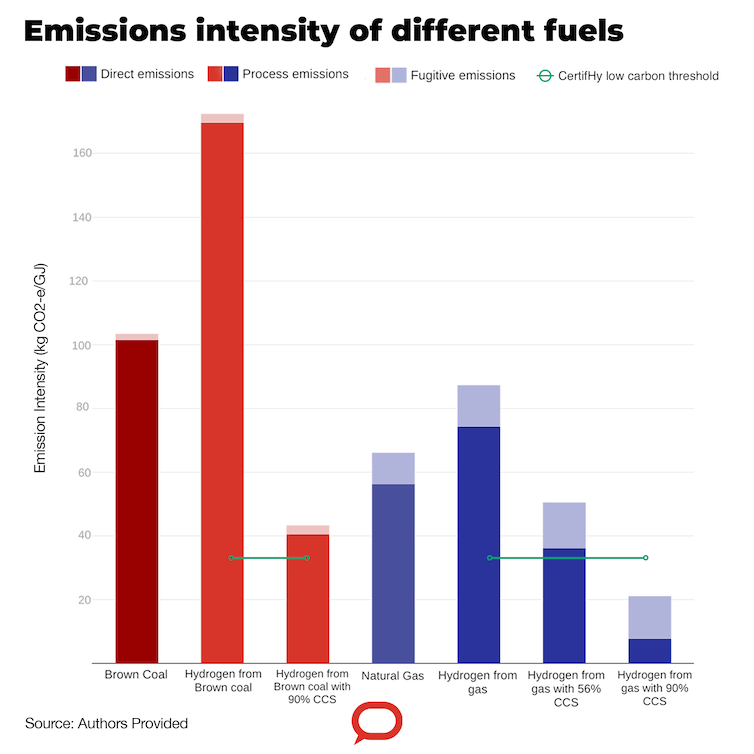 Now, a look at costs

A carbon penalty, such as is applied in Europe, would make hydrogen from fossil fuels more expensive. A penalty of US$50 per tonne of CO₂ pushes the central production cost estimate up to between US$2.24 and $3.15 per kilogram.

By comparison, Australia’s Technology Investment Roadmap set a target for “clean hydrogen” to be produced for under A$2 per kilogram, or US$1.43.

The true cost of carbon avoidance using CCS varies widely and is often not well defined. Current cost projections rely on optimistic estimates of CO₂ transport and storage costs, and generally do not include monitoring and verification costs for long-term storage.

So how does all this compare to “green” hydrogen?

Our analysis found the median estimate for renewables-based electrolysis falls from US$3.64 per kilogram today to well below US$2 per kilogram.

The cost of producing hydrogen with renewables depends mainly on the cost of electricity, as well as the capital cost and how intensively the electrolyser is used. The cost of solar and wind power has fallen dramatically in the past decade, and this trend is likely to continue.

As electrolysers are deployed at scale, their costs may decrease rapidly - pushing down the cost of green hydrogen.

More may not be better

So what does all this mean? If Australia pushes ahead with producing hydrogen from fossil fuels, two possible risks emerge.

If carbon-capture rates are low, we may lock in a new high-emissions energy system. And if capture rates are high, those production facilities could still become uncompetitive. This raises the risk of stranded assets – investments with a short economic life, which do not make a viable return.

Investment decisions for large scale hydrogen production will ultimately be taken by businesses, on the basis of commercial viability. But governments have an important role early on as they set expectations and assist pilot projects. The fossil fuel route is becoming a riskier bet.

Barnaby Joyce’s latest antics do nothing to move Australia forward » Community batteries: what are they, and how could they help Australian energy consumers? »