Indonesia is a tropical country with year-round sunshine. My research on how Indonesia can generate electricity entirely from renewable energy has calculated the country has the potential to generate about 640,000 Terrawatt-hours (TWh) per year from solar energy. That’s equivalent to 2,300 times last year’s electricity production.

The domination of non-renewable energy power is expected to last until 2050.

Even though Indonesia has abundant solar energy, state power firm PLN, currently the only electricity supplier, can’t tap into it right away as it is bound by contracts it has signed with various power plant operators. These contracts last for a minimum of 20 years.

The government predicts the use of solar energy in electricity production will only account for less than 10% of the total energy mix by 2050.

I argue that, with its abundant sunshine and unique topography, Indonesia should be able to generate 100% green electricity from its solar energy by 2050. The government needs to set attractive policies for both customers and power providers to make this happen.

Here are three reasons why Indonesia has the potential to generate its electricity entirely from solar energy:

Indonesia’s electricity consumption was 1 megawatt-hours (MWh) per capita in 2019, only 11% of Singaporean consumption.

Indonesia’s National Electricity General Plan states that the country’s electricity demand will reach 1,000 TWh, equal to 3.3 MWh per capita, in 2038.

Assuming this trend continues, the projected electricity demand will reach 2,600 TWh, or 7.7 MWh per capita, by 2050. 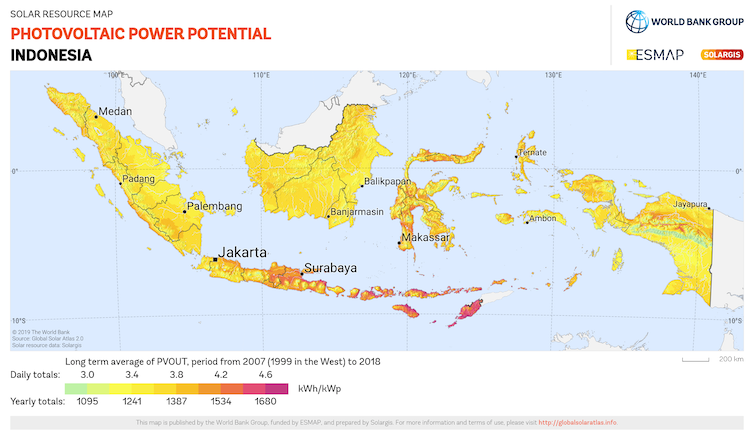 To supply the 2050 demand, Indonesia needs a total capacity of 1,500 gigawatt (GW) of solar photovoltaic (PV) power plants. Solar PV works to convert sunshine to electricity using photovoltaic modules. It is expected 230 MW solar PV will be installed this year.

According to my research, providing 2,600 TWh electricity will not be an issue due to the massive solar energy that Indonesia has.

2. Have large areas to install PVs

To install enough PVs to meet the 2050 target, Indonesia needs at least 8,000 square kilometres, or about 0.4% of the country’s land area,. 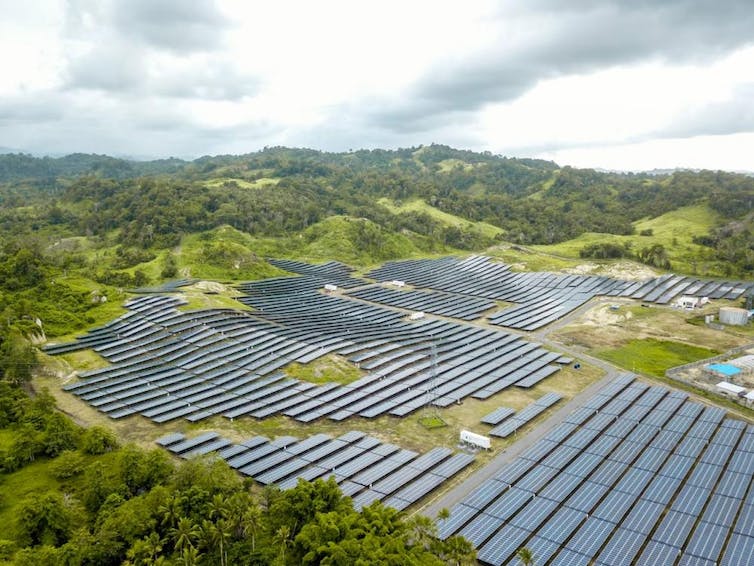 A solar photovoltaic farm with a capacity of 21 megawatts in Likupang, North Sulawesi, Indonesia. Ministry of Energy and Mineral Resources

Should problems with land acquisitions arise, the government could also install the solar panels on water. A large fraction of these panels can be placed on floats on lakes and sheltered seas.

Indonesia has huge water territory as the world’s largest archipelago. It has lakes with an area of about 119,000km² and territorial sea of about 290,000km².

Additionally, most buildings can host solar panels on the roof. With these plans, the installation of solar panels will require only 0.1% of Indonesia’s land. 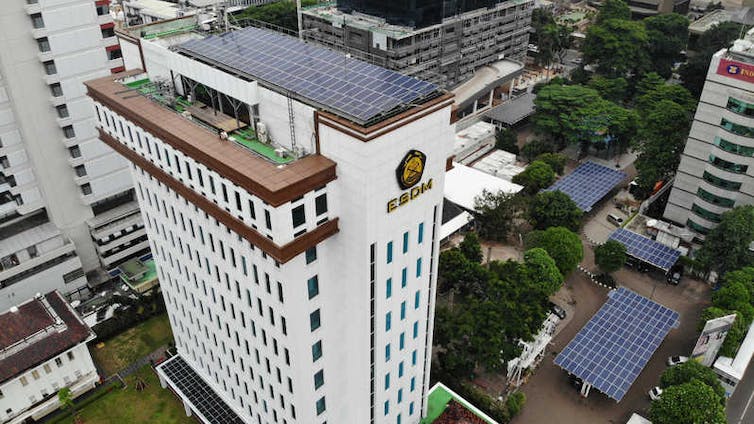 The global weighted-average cost of investment in large-scale solar PV is falling fast. It fell by 77% between 2010 and 2018.

These prices are well below the cost that Indonesia’s state power firm, PLN, needs to generate electricity, at around US$79/MWh.

To meet the 2050 figure, the government must generate 50 GW from solar energy each year, starting 2021, and connect it to power grids.

This is likely achievable, considering that building solar PV projects is much faster than for fossil power plants.

A solar PV farm needs a maximum of two years of construction, while coal-fired power plants need at least three years to complete.

Indonesia has 26,000 good pumped hydro sites with a combined storage capacity of 820 TWh. This number is 100 times more than required to support a 100% renewable electricity system from solar panels in Indonesia.

The need to go green

Indonesia has pledged to reduce greenhouse gas emissions by 29-41% by 2030.

It has also set an ambitious target that its renewable energy portion will double to 23% of the country’s total energy mix to generate electricity by 2025. It is expected to reach 31% by 2030.

Fossil fuel power plants and transportation still contributed 34% of Indonesia’s emissions in 2017. This could become much larger as energy consumption increases unless Indonesia shifts electricity generation to renewables as other countries do. 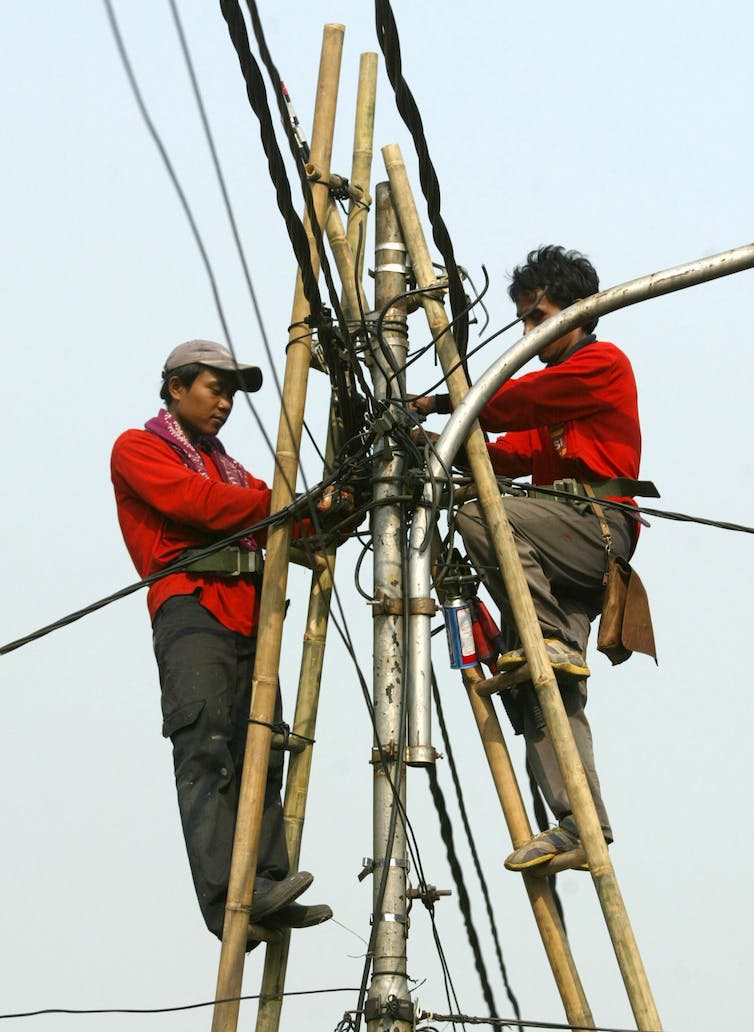 For example, Australia reached a 25% renewable energy target in 2019 and is on track to reach 50% renewable energy in 2025 by installing wind power and PV. Vietnam has secured 135 solar PV projects with a total capacity of 9 GW.

India has installed 32 GW of solar PV, with a target of 100 GW by 2022. Singapore is constructing a 60 MW floating solar PV plant.

The vast and consistent abundance of sunshine in Indonesia, in combination with the low and falling price of solar PV, means 100% renewable electricity with zero emissions is eminently feasible for Indonesia to achieve in 2050.

If you could enjoy environmentally friendly electricity without worrying about the bill, wouldn’t you be happy?

This article was first published in The Conversation on 22 April 2020 as part of a series for Earth Day.

Mr Silalahi is a member of the ANU Energy Change Institute, and has worked in the Indonesian Ministry of Energy and Mineral Resources' Directorate General of Electricity since 2009.