In the 1980s, a global race was underway: to find a more efficient way of converting energy from the sun into electricity.

Some 30 years ago, our research team at the University of New South Wales (UNSW) came up with a breakthrough, called the PERC silicon solar cell. The cells have become the most widely deployed electricity generation technology in terms of capacity added globally each year – comfortably exceeding wind, coal, gas, hydro and others.

The terrible bushfires in Australia this summer, enhanced by the hottest and driest year on record in 2019, underline the need for urgent reductions in greenhouse gas emissions. By far the most effective way is driving coal out of electricity systems through very rapid deployment of solar and wind.

Soon, our Aussie invention will be generating half the world’s solar power. It is a pertinent reminder of Australia’s capacity for finding transformative technical solutions to address climate change. But we need the right government support.

By the early 1980s, the best laboratory cells around the world had reached 17% efficiency. This means that 17% of the sunlight was converted to electricity, and the rest (83%) of the solar energy was lost (as heat).

This new, more efficient cell was better than the old ones because we eliminated some defects in the silicon crystal surface, which led to lower electronic losses. The PERC design also enabled us to capture the sunlight more effectively.

In the 1990s, further improvements to laboratory PERC cells were made at UNSW, leading to cells in the 24-25% efficiency range. The global silicon solar cell efficiency record remained at UNSW until recently.

There was a 25-year gap between development of the PERC cell and its rapid commercial adoption, which began in 2013. During this time, many people worked to adapt the PERC design to commercial production.

PERC cells are more efficient than previous commercial cells. Strong incentives for more efficient cells have recently arisen due to the continually falling share of cell costs as a proportion of total solar power system costs (including transport, land and mounting systems).

The big benefits of solar

Solar is growing faster than the other electricity generation technologies. Over time, as fossil-fuelled power stations are retired, solar (and wind) will dominate electricity production, with consequent large reductions in greenhouse gas emissions. 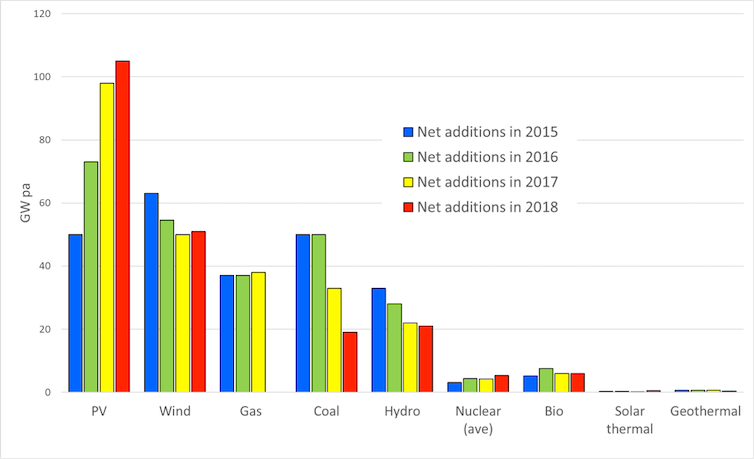 This year, enough PERC solar modules will be sold to generate 60-70 gigawatts of power. According to projections, PERC will reach three quarters of annual solar module sales in the mid-2020s, enough to match the generation capacity additions from all other technologies combined.

About A$50 billion worth of PERC modules have been sold to date. This is expected to reach several hundred billion Australian dollars later this decade.

Australian emissions (excluding those from bushfires) are falling because we are installing solar and wind four times faster per capita than the EU, US, Japan and China.

Our position as a global leader in renewables installation is uncertain because the Renewable Energy Target, which was achieved in 2019, has not been extended.

With supportive policy, such as facilitating more transmission to bring solar and wind power to the cities, Australia could greatly increase the speed at which wind and solar are deployed, yielding rapid and deep cuts at about zero-net cost.

Such policy would entail stronger and sustained government support for renewables deployment, and research and development of new technologies.

Solar energy is vast, ubiquitous and indefinitely sustainable. Simple calculations show that less than 1% of the world’s land area would be required to provide all of the world’s energy from solar power – much of it on building roofs, in deserts and floating on water bodies.

Solar systems use only very common materials (we could never run out), have minimal need for mining (about 1% of that needed for equivalent fossil or nuclear fuels), have minimal security and military risks (we will never go to war over solar access), cannot have significant accidents (unlike nuclear), and have minimal environmental impact over unlimited time scales.

Australia is making major contributions to mitigating climate change both through rapid deployment of wind and solar and technology development such as our PERC cells. But with better government support, much more can be done – quickly and at low cost.

This article originally appeared in The Conversation.